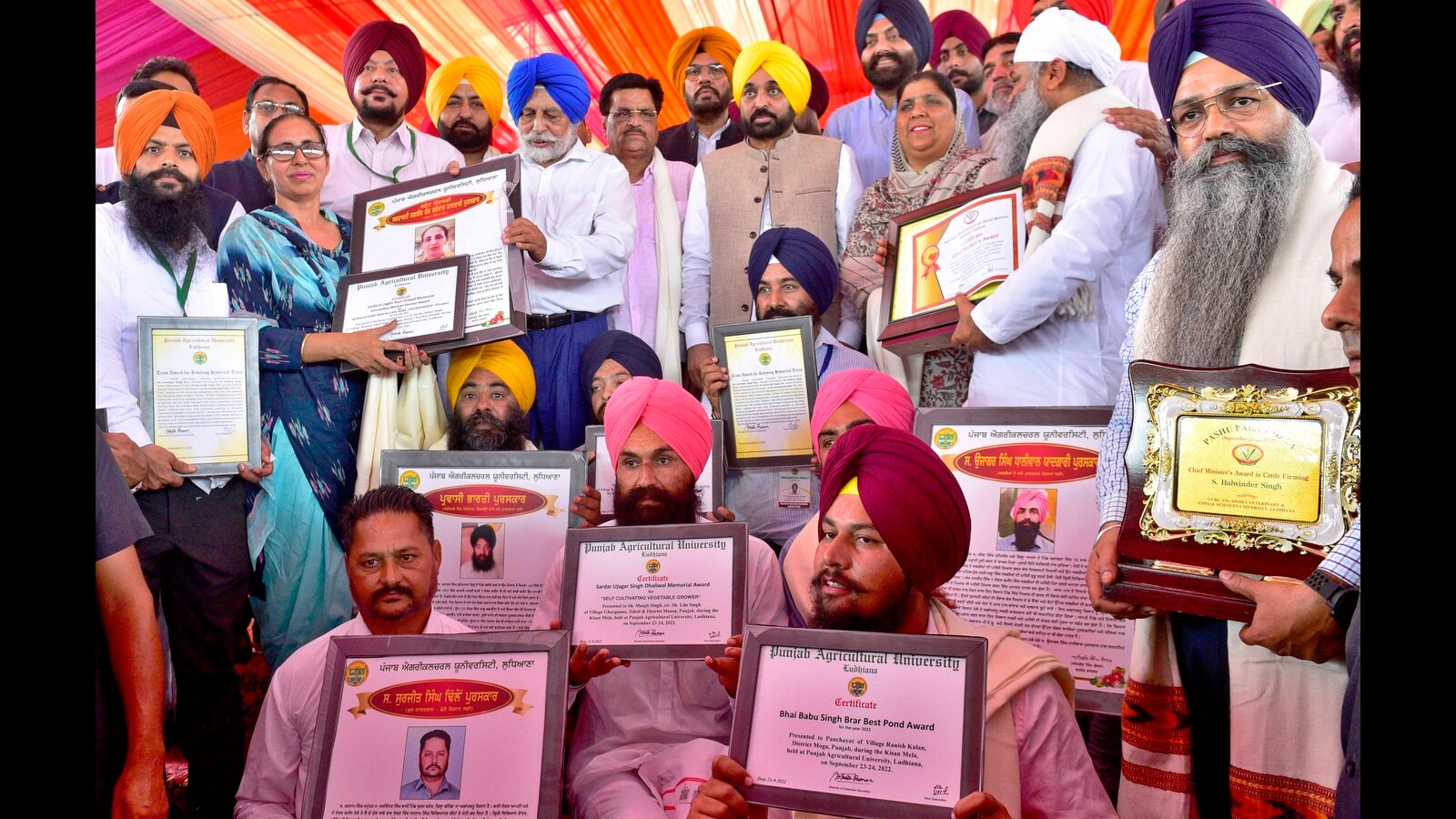 Calling upon the PAU authorities to not call the farmers to the varsity for a visit but instead themselves go to the fields and meet them to solve their problems concerning crops, Punjab Chief Minister Bhagwant Mann, inaugurating the two-day PAU kisan mela on Friday said its time the authorities step out of their air-conditioned offices and travel to the far-flung areas of the state to deal with real issues faced by the farming community.

This, Mann said while reminiscing his childhood days when he used to visit kisan melas when no one knew him. “I thus wish to speak from the heart. Director Extension, Ashok Kumar in his speech before me urged the farmers to report all problems to them at the varsity and that they are always there for them. Mera sawaal hai, oh kisaan Ludhiana PAU aayega ek sundi te crop laike? (My question is, if there is a pest attack in a field at a far-off village, the farmer will come all the way to PAU Ludhiana with the crop alongwith the worm.” By then what will happen to his entire crop?” he asked.

Mann added that it is time we come out of the traditional ways of treatments that spread more by word of mouth. “In case of pest attack, one farmer reports to another farmer in his neighbourhood who tells him that there is a spray with a red cap that is effective on the pest. In a week, entire village is spraying the bottle with a red cap, not knowing what it is,” he said sending the audience into peals of laughter. “I pray to the authorities with folded hands to save the farmers from these spray bottles with red caps, the content of which they are not even aware off,” he said adding that the soil of Punjab is the most fertile in the world. “You people spend lakhs to go to Canada, are willing to sell off land, for what? For six months, it is biting cold in these countries,” he said.

Mann said that the state is fully ready to adopt crop diversification but the Government of India must provide assured mechanism to give remunerative prices for these crops.

“The centre must take this step for ensuring that farmers of the state shift from water guzzling crops to less water consuming crops,” he said adding that instead of paddy, the farmer of the state is ready to sow sunflower, maize and pulses but for that they must get adequate and assured price.

He said that this will help in checking the depleting water table in the state on one hand and making agriculture a profitable venture on the other. Bhagwant Mann said that this is the need of hour to avert water crisis in the state.

The Chief Minister said that Union government imports pulses worth ₹120 billion dollars annually from other countries whereas it is not ready to provide Minimum Support price to farmers of the state who are ready to cultivate it.

Solution to stubble burning on the cards

Mann said that in coming days an important decision will be taken to get rid of the menace of paddy straw burning. Bhagwant Mann said that it was duty of Union government to find solution for it as farmers produce rice for the country.

The Chief Minister said that paddy goes in national food kitty but centre asks states to tighten noose around farmers to prevent paddy straw burning. He asked the experts of PAU to reach out to the farmers to acquaint them with new technology in agriculture sector. Bhagwant Mann said that farmers work hard in fields and have no time for upgrading their expertise, adding that experts must reach out to the farmers to make agriculture a profitable venture. The Chief Minister also asked PAU to intensify research and bring a new revolution in agriculture through technical interventions. He further said that to promote Dairy the Punjab government is promoting Verka, which is renowned globally, to supplement income of farmers. Bhagwant Mann also said that thrust is also being laid on proper marketing of Pathankot’s Litchi and Kinnow of Abohar. The Chief Minister also called on the farmers to reduce the expenditure on marriages as it poses huge economic burden on the families whereas marriages must be solemnised in simple way. He reiterated the firm commitment of his government to make Punjab a drug free state. Bhagwant Mann said that the state government is taking strict action in this regard. On the occasion Agriculture Minister Kuldeep Singh Dhaliwal recalled stellar role of PAU in agriculture sector. He also appealed the farmers to refrain from burning paddy straw.