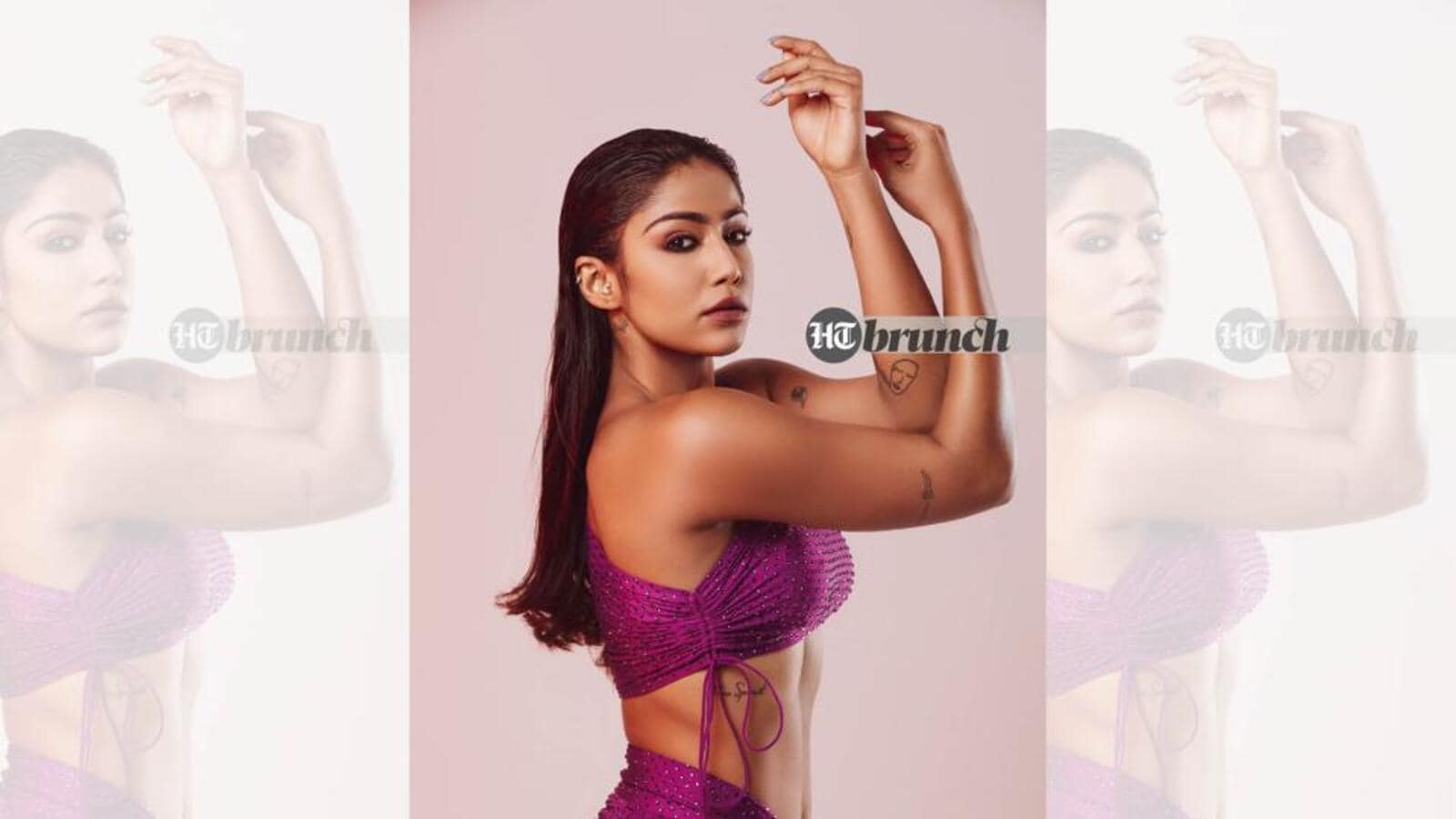 She released her first video in 2015, when she had 5K followers on Instagram, which was still new in India. Nearly eight years later, Mumbai girl Santoshi Shetty, 28, is one of the country’s top fashion content creators, having added 750k followers to her count over these years. Now, as one of the pioneers of content creation in India, she represents the country at international fashion weeks.

But Santoshi Shetty no longer needs the drama of social media life. Today, as well established she is in her fashion content creation space, her follower count means little to her (though her followers mean much). Numbers have nothing to do with her job, she says, and she isn’t chasing them anymore. And over the years, having adjusted to every algorithm change and every new movement on social media, she’s evolved into a person who knows her job and does it with dedication, but refuses to let it take over her life.

As hundreds of young people in India scramble to achieve the kind of status that Santoshi Shetty has in the social media space, Santoshi herself has evolved.

“Back then, brands had just started looking for collaborations with people who had fashion-oriented profiles. I started with a lot of barters for phone covers etc. I would tell my mother, ‘Yay! I am getting free covers just to post about it on IG’,” she recalls at the HT Brunch cover shoot, where we not only get her to style herself, but also do yoga moves, a pandemic passion that has become a profession and dominates her Instagram feed today.

However, Santoshi had had no intention of getting into the fashion space, even though she enjoyed styling herself. “I never repeated an outfit in college. I would style it differently. I was choreographing fashion shows, and so was known as the fashion person in college,” she explains.

She was actually studying architecture and was a student at the IS College of Architecture, Bandra. “It was a fun creative experiment that enabled me to go for study trips,” says Santoshi, who credits her travels for helping her experiment with her style and evolve an intuitive understanding of global trends trickling into India.

That’s when she started uploading fashion posts on Instagram. “I went to H&M in Europe while on a family trip at a time when the brand wasn’t available in India,” she recalls. Her parents helped her click pictures for the ‘gram’. But it was only when YouTube approached her to make a fashion channel called The Styledge that Santoshi began to realise that something about fashion resonated with her. She related to the design aspect of fashion, plus, she enjoyed flaunting her edgy style. Her debut video was about styling a denim jacket. “I realised then that videos were my thing.  I shot one day a month to make content for four videos,” Santoshi reminisces.

Given Santoshi’s growing immersion in fashion, her career switch didn’t come as a surprise to her hotelier father and power yoga trainer mother.

“Back then, we only had Facebook and I would change my display picture many times and get 100-200 likes. That was an obsession,” Santoshi laughs. “My parents knew my intentions were right, as being a fashion creator fit my personality. And I was responsible with my marks.”

In fact, it was her father who suggested that she leave architecture. “I was the one who was all, ‘are you mad?’ because I wanted to get my degree!” she says. “Today, they keep telling people about me and my mom still helps me out by managing a lot of things.”

“We creators were just getting to know each other, besides learning about the industry. We would discuss rate cards and media kits and support each other. I had no idea about the business aspect of it all and I couldn’t handle the finances, but I met people who helped me learn and understand it. I didn’t know I needed a manager till my dad suggested I get one,” she smiles.

The scary part was meeting experienced people from the fashion industry. “We were doing this out of sheer passion while they had studied fashion and were experienced. It was intimidating initially, but with time, I realised that they liked what I brought to the table, and that I too had something to give,” Santoshi nods.

Things have changed in the last near eight years: Santoshi has slowly but surely moved away from chasing numbers.

“I’ve reached a stage where there is no pressure to get numbers. At one point, I was thanking people after every 100 followers etc, but I wasn’t feeling it after I hit 500k. I am grateful to everyone who follows me, but it’s not about the numbers,” she shakes her head.

This realisation sank in when Santoshi mingled with international influencers at fashion events. “I am grateful to have worked with brands like Louis Vuitton and H&M at such big events. These events made me realise that brands don’t care about your numbers, only your content—how interesting you are, how approachable you are. If you go to an event, it’s about your personality, not social media. If you want to stand out, you have to show your uniqueness,” she explains.

Lack of differentiation is a problem she’s noticed with some Indian brands. They are particular about what they want but give the same brief to all creators, irrespective of their personalities, she says. “But how is that unique to the creator? The creator’s followers follow them to see their personality. You have the power to say no, after a point,” she says.

But even with this lack of discernment among Indian brands, Santoshi learned that brands don’t necessarily pick you for your numbers.

“I don’t have the maximum numbers and brands never picked me because of it,” she says. “If you depend on numbers so much, you will cry over losing followers, which is, honestly, a part of the process. I unfollow people I can’t relate to. I’m okay if someone unfollows me. Besides, Instagram keeps changing its algorithm, so what’s the point in worrying anyway?” she shrugs.

A change is here

Over the years, not only has Santoshi stopped worrying about numbers, she’s also been able to perceive social media as her work space rather than her whole life.

“When I was younger, it was all fun,” says the millennial who has grown up on social media not just professionally but personally, mentally and spiritually. “But you hit a saturation point and don’t want to show so much of your personal life on social media.”

Not that she ever cared about the judgmental lot you find on social media and in society at large. Living your life online in the public eye has its pros and cons. “If you’ve been through relationships and break-ups, people want answers. They say they need closure. I don’t blame them. It’s natural, as they have been a part of your journey and are curious to know,” she explains.

Then there are also times when your intent doesn’t translate for a viewer, who may then troll you. “You can’t go and explain things to them specifically because everyone is different. I’d rather just apologise and say live and let live,” Santoshi says.

It hasn’t always been smooth sailing. She still remembers getting upset when a YouTube video got a thumbs down when she was 21. “Social media is overwhelming. But eventually, a negative comment becomes your strength,” says the creator who also got flak during the pandemic for opening up her DMs to followers, offering therapy sessions for ₹1,500.

“Despite the hate you may get, you need to take care of your mental health and energy. Ask yourself: Are you feeling lost and insecure and have anxiety? Or, do you not really care because people will talk and you have accepted that?” she says.

The pandemic was a transformative period for Santoshi, who took to yoga, and now conducts lessons with her partner and teacher, Anti.

“I was always into fitness. Investing in my body is akin to investing in my job. If I am always in front of the camera, I want to feel good as that’s when I deliver my best. If I am not working on my body, I won’t feel confident. But it wasn’t just the physical aspect of fitness. There was a period when I was looking fit, but not feeling strong,” she says.

That’s when she met her partner Anti, and explored Ashtanga, which made her focus on the food she was consuming, her sleeping patterns and being more in harmony with nature.

“An organic shift happened, personally and professionally. Now, I am wearing different clothes and posting, but I am doing more than just posing. It’s helping my work. I don’t want to just preach about wellness on social media,” she says.

Santoshi has also the realised the value of putting your mental health first. “I love working, but I will never do it to a point where I am compromising on my health. When I was studying architecture, we had to pull all-nighters. But now, if an architecture student comes to me, I tell them it’s not worth it,” she shrugs.

Her relationship with her followers is friendlier too, given that being a content creator has lost its “celebrity” status. “There is no ‘fan’ vibe. It’s more subtle and intimate now,” Santoshi claims.

Any plans for the future? “At one point, I wanted to chat with people on social media to share my experiences. That didn’t work out and it all translated to this day today where I have the same intention with my current work: of allowing people to connect to themselves. I am doing that through yoga and chakra dance and life and love,” says Santoshi.

Connect with us on facebook.com/hindustantimesbrunch