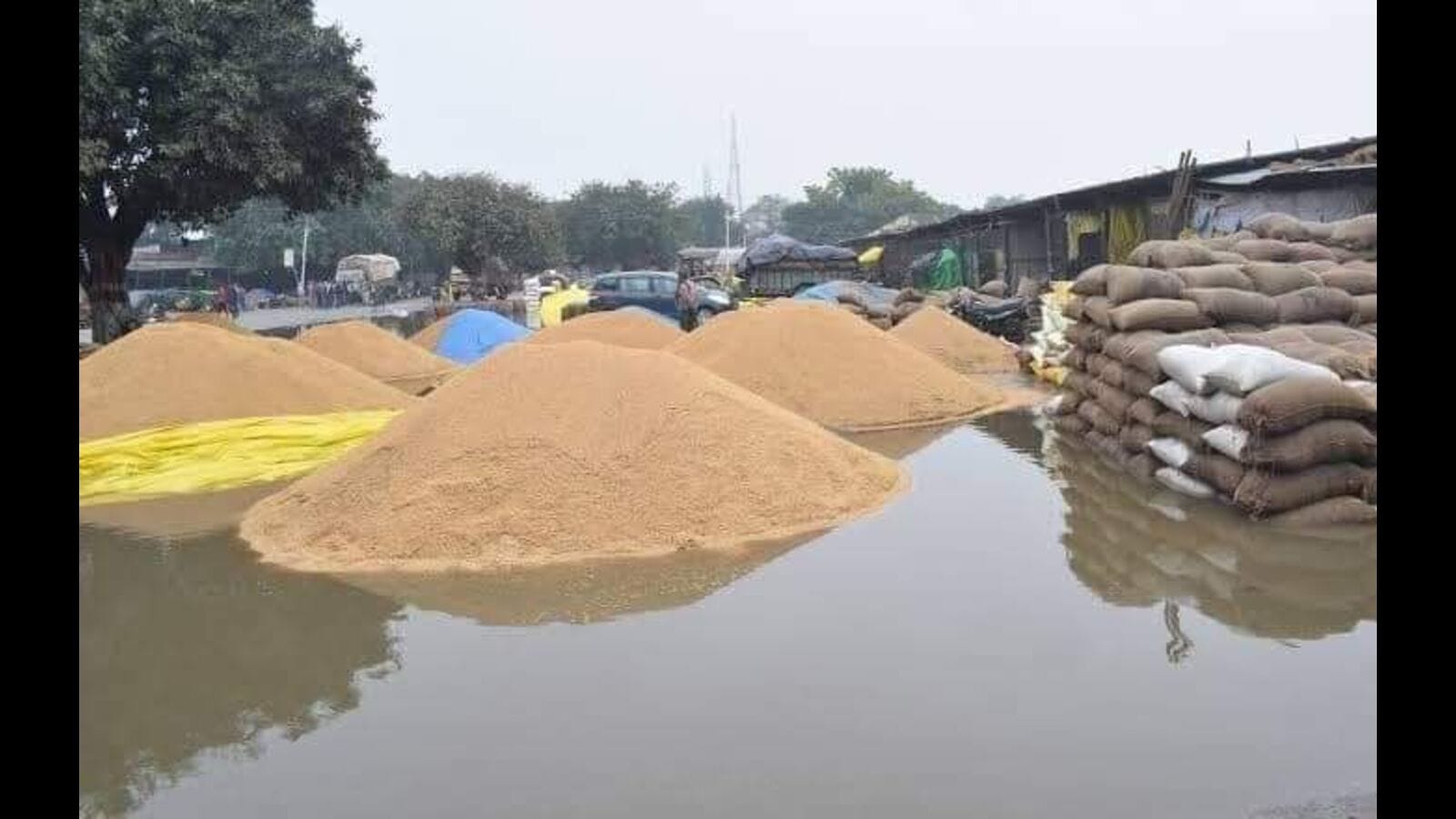 : Waterlogging in grain markets of Haryana due to incessant rains has added to the worries of farmers as they fear loss of their agricultural produce lying in the mandis.

The farmers, who have harvested their crop, are unable to sell their produce in mandis as the procurement operations have been stopped in the grain markets for the past five days due to indefinite strike by the arhtiyas.

“My produce of three acres of paddy is lying in the mandis for the past four days but there are no buyers. The crop has soaked water now and it will get damaged and the grains will also their lose shine,” said Mandan Lal, a farmer from Indri in Karnal district.

Farmers said that the rain and waterlogging will also have a bad impact on the standing crop as most of it is flattened.

Farmer leader Ratan Mann has demanded the government to provide immediate relief to farmers, saying that they were already expecting huge losses due to dwarfing diseases and now the rains and strike has added to their woes.

He said that the government should order a girdwari to assess the losses and the procurement should be started immediately.

Sujan Singh, chief administrator of the Haryana State Agricultural Marketing Board (HSAMB), advised the farmers and arhtiyas to make proper arrangements to protect their crop from rains.

He said that all arrangements were proper in all the mandis and procurement will start as per the decision by the competent authority.

Former Haryana chief minister Bhupinder Singh Hooda in Chandigarh on Friday demanded compensation for the crop damaged due to rains in the last two days.

The leader of the opposition in a statement said that every farmer has suffered loss due to the destruction of the standing paddy crop.

“Due to the waterlogging, all the crops standing in the field, including paddy, have been affected. In such a situation, the government should immediately get the girdawari done and give compensation to the farmers,” Hooda said.

Hooda said that the government should also resolve the issue with the commission agents so the procurement operations could be resumed in the mandis as the strike has cost the farmers heavily.

Karnal residents and commuters had to face problems as heavy rainfall caused waterlogging and flood-like situation and heavy traffic jams on multiple stretches in the city.

As per the information, over 76 mm of rain was reported in the district.

The residents alleged that the government and the administration should take strict action against the officials who are responsible for waterlogging as they had to face this problem every year.

In Rohtak, heavy rain brought life to a standstill as many vehicles were seen stranded in knee-deep water.

Low lying areas were inundated with water and sewers were choked. In many areas, water entered the homes and police officials were seen struggling to help vehicle owners in dragging their vehicles to the roadside.