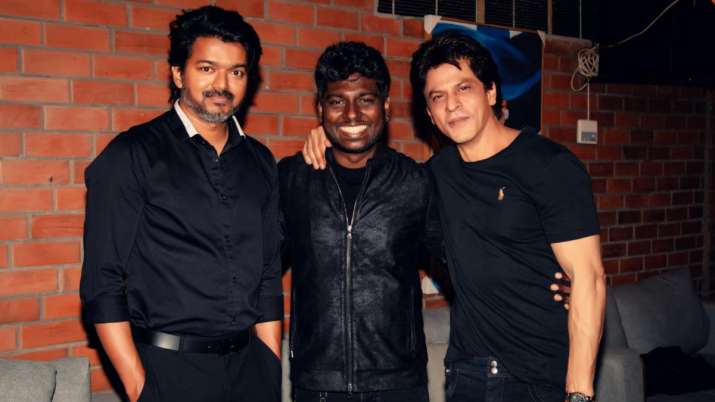 Thalapathy Vijay is expected to be a part of Shah Rukh Khan’s upcoming film Jawan ever since Atlee shared a picture with two superstars on his Twitter handle. In the viral video, Atlee can be seen standing with Vijay and SRK, all of them dressed in all-black outfits. The picture grabbed the attention of the fans who are eager to witness Vijay and Shah Rukh on one screen. The image is said to be from the set of Jawan, as per the speculation on social media. On Thursday, Atlee took to Twitter and shared a picture along with a heartfelt note on the occasion of his birthday, thanking his fans and followers. He captioned the post as, “What more can I ask on my bday, the best bday ever wit my pillars. My dear @iamsrk sir & ennoda annae ennoda thalapathy @actorvijay.”

The picture has indeed left the fans curious. One of them commented, “An iconic picture! #ThalapathyVijay and #ShahRukhKhan are easily the two biggest superstars in the history of Indian cinema. Blockbuster after blockbuster, unmatched superstardom & never-ending craze. The two biggest money-spinners of the country.” Another shared, “Rolex reach. Now Vijay accepted cameo. Inspirational suriya.”

Check out some more reactions of the fans below:

Meanwhile, the rumours of Vijay’s cameo in Jawan are not floating for the first time. According to previous reports, Vijay may shoot for his parts in the movie in September in Chennai. Reportedly, the Beast actor will shoot for a day for his cameo role in Jawan without charging any money. However, the official confirmation on this regard is awaited by the makers. Meanwhile, a few days back also a picture was being circulated on social media platforms in which Shah Rukh was seem wearing a white shirt and Vijay sported a purple shirt. Atlee was seen wearing a face mask.

While the plot details have been kept under the wrap, Jawan has got Vijay Sethupathi onboard in a prominent role of the baddie. The development was confirmed by Vijay’s publicist Yuvraaj earlier in August.

Jawan had begun filming last year in Pune. SRK is believed to have shot some portions of the movie too. With Vijay Sethupathi coming on board the project, the complete cast of Jawan includes the likes of Shah Rukh Khan, Nayanthara, Vijay Sethupathi, Priyamani, Sanya Malhotra, Yogi Babu, Sunil Grover, Simarjeet Singh Nagra, Azzy Bagria and Manahar Kumar. Jawan will release on June 2 next year.