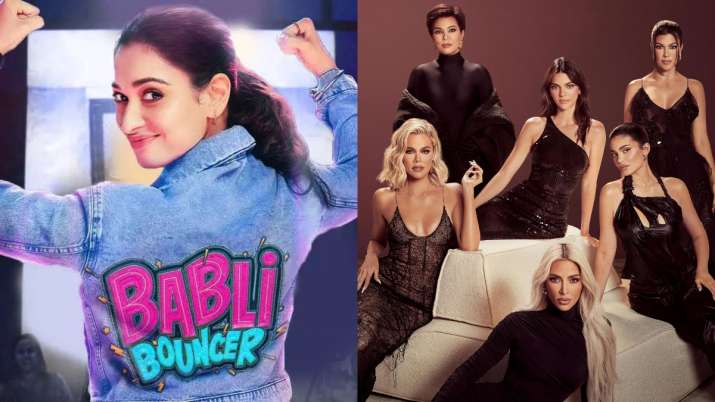 OTT Movies and Web Shows this weekend: The last week of September is all set to treat the movie lovers with an exciting mashup of drama, romance, thrill, reality TV and crime. While Tamannaah Bhatia is here with her film Babli Bouncer, the Kardashians will bring their life to the limelight with season 2 of the show. More web shows like Hush Hush and Jamtara are also available to watch on Netflix, Prime Video, Disney Plus Hotstar, Zee5, Voot Select, Aha, Hulu and other OTT Platforms.

So grab your popcorn to binge-watch exciting movies and shows on OTT this weekend.

‘Babli Bouncer’ is a slice-of-life film starring Tamannaah Bhatia in the lead. In the film, the actress is seen as bold and brave. She rides a bullet, lifts heavy weights and can do anything a man can. Directed by Madhur Bhandarkar, the film also stars Saurabh Shukla, Abhishek Bajaj and Sahil Vaid in pivotal roles.

Speaking about how she prepared for her character, the actress shared: “I learnt riding a bullet, before this, I had ridden a scooty. So, I think the most difficult part is to ride a bullet because it is a very heavy bike, so it took me a bit to get comfortable with that. I also learnt beatboxing, I never knew beatboxing was not beating someone but it’s a type of voice, the different sounds that we make, that too I learnt for this film.”

After a successful 20-seasons of ‘Keeping Up with the Kardashians’ and ‘The Kardashian Season 1’, the reality TV star family is back with season 2. The show is based on the life of the Kardashian and the Jenner siblings and gives an insight into their love lives. It will also mark the debut of stand-up comedian Pete Davidson, who was dating Kim Kardashian at the time.

Earlier, Kim had released the teaser of the show in which she is seen addressing her relationship with Pete. ‘The Kardashians’ will also give a sneak peek into Kylie Jenner’s second pregnancy with boyfriend Travis Scott.

Atithi Bhooto Bhava is a romantic comedy starring Jackie Shroff, Pratik Gandhi, Sharmin Segal in the lead roles and Divinaa Thackur, Simran Sharmaand, Prabhjyot Singh in prominent roles as well. The film tells a story of Srikant Shirodkar [Pratik Gandhi], a witty stand-up comedian who takes his relationships for granted including with his beautiful live-in girlfriend Netra Bannerjee [played by Sharmin Segal]. Things take a turn when a Ghost named Makhan Singh [played by Jackie Shroff] enters their lives and asks Srikant to fulfil a promise made by him.

The series picks up six months after the critically acclaimed film and centers on Ashley (Jasmine Cephas Jones), who is at the heels of middle-class life in Oakland. As Miles, her partner, is suddenly incarcerated the episode leaves her to navigate a chaotic and humorous existential crisis.

With new cons and tricks, the crime drama Jamtara is back with season 2. It will see the phishing world opening up further with bigger stakes and greater threats as it will intricately weave in revenge, betrayal, politics and an unquenchable thirst for power with a shift in power dynamics as new players enter the game.

The all-woman whodunit series ‘Hush Hush’ is helmed by Tanuja Chandra and features Juhi Chawla, Soha Ali Khan, Shahana Goswami, Kritika Kamra, Karishma Tanna and Ayesha Jhulka. It is a story of a set of women whose lives take a dramatic turn when a secret from their past comes out. It seems like a searing blend of suspense, mystery and rollercoaster emotions.